Oh, say can you see: 5 Questions for the ECHL Revolution.

Share All sharing options for: Oh, say can you see: 5 Questions for the ECHL Revolution. 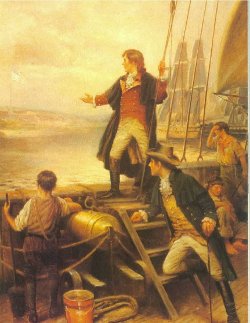 They may be called the Colonials but in the battle for the ECHL Robert Morris is most defiantly the 'Power' trying to maintain their grip on some pesky little rebellion (war of 1812). The Colonials are trying to lock down their fourth consecutive ECHL division title in this, their final season as a member of the conference. The Battle of Baltimore was a key turning point in the US revolutionary war, and this Fridays Battle of the Pepsi center will play a pivotal roll if UB hopes to upend the #17 ACHA power.
Buffalo follows the Robert Morris game with a Saturday match against Mercyhurst, a team who themselves hope to set up a run towards taking down the Colonials
Right now the Colonials have a very comfortable lead on Buffalo and this week will be the last chance that UB has to directly cut into their lead. Mercyhurst is a middle of the pack team in the ECHL but one that, of late, has shown some real momentum. If the Bulls can sweep the weekend, and get some help from Niagara (who plays Robert Morris on Saturday) they will go into next week two points behind the Colonials.
Current ECHL Standings
The last time UB faced off against Robert Morris they lost a tough one goal decision. After Jumping out to a 2-0 lead on goals by Craig Meany and John Fitzgerald the Bulls would surrender five goals in 14 minutes before Fitzgerald netted a second goal in the waining moments of the second period. Going into the third period down 5-3 The teams traded goals until UB Pulled to within one at 7-6 with several minutes left. With just over three minutes remaining Bryan Chiavetta of Robert Morris would put the game out of reach. A final flurry during the last minute by Buffalo would produce one goal, and give John Fitzgerald a hat trick but would not be enough to tie the game.
1) Who does UB have to watch out for?
Robert Morris: The Colonials are an explosive team, they average nearly six points per game and have done it against some pretty stiff competition. Their five straight goals against Buffalo is what sank the Bull when these two teams met back in November. Bryan Chiavetta, Zach Stern, Matt Javitt, Kory DuMond, Karl Taylor, and Ryan King are all just as dangerous now as they were then.
Mercyhurst: Figuring out how to stop the Cyclones is easy, doing it is somewhat more difficult. Stop Shane Vorndran and Josh Mandic. The two account for a more than a third of all Mercyhurst goals and a just under a third of all assist.
2) How good are their Goalies?
Robert Morris: The Colonials rely on a trio of net minders Robbie Salerno, Brent Baburich, and Phil Salerno all have a better save percentage than any UB Goalie. While most nights Robert Morris lives or dies by their offense their goalies are capable of carrying the team occasionally when call upon to do so.
Mercyhurst: As a team they are giving up just under five goals per game (4.72). They have been playing a hot hand of late (3.75 in their last four ACHA games) including a standout one goal performance against Pitt by Robert Kelly who would stop 47 shots.
3) How are they on the Power play?
Robert Morris: The last time these two teams met Robert Morris was in a 2/31 funk, since then they have improved markedly to 4/13 (during the four games following their last meet up with Buffalo). King (2), Chiavetta (1), and Bennett (1) have all made their presence felt on the powerplay
Mercyhurst: In their last four games they are scoring on the power play about 30% of the time and the hist are coming from every one Brian Nagy, Josh Mandic, Nelson Hamwey, Mark Loecher, Mike Herhal, Matt Leitzel, Doug Stanton, Shane Vorndran have all registered one power play goal over that period (the team is 8/25).
4) How are they Short Handed?
Robert Morris: In the four games coming into the November match up the colonials were holding teams to about 13%, in the games running up to this contest they have shut their opponents down completely. Through their last four games allowed no goals on their last 19 short handed situations.
Mercyhurst: Not only are the cyclones holding their opponents to just over 8% on the power play, they are actually out scoring the opposition when Mercyhurst finds them selves down. Four power play goals in the past four games (two by Shane Vorndran, and one a piece byt Josh Mandic and Chris Madina) double up the number of power play goals they have given up (2/23).
5) What to expect form the game?
Robert Morris: The key for Buffalo winning is the same as it was back in november

"How UB goal tending is going to hold up under the assault potential of the Colonials is the key to the game. The Bulls are not going to be able to stop Robert Morris from getting their chances so Rich Latona is going to have to come up big, otherwise this game can get out of hand, fast." -- Bull Run

Last time around UB got out to a nice 2-0 lead before getting buried under a wave of Colonial offense. Robert Morris has tight end down their penalty killing units so UB might not be able to count on three power play goals to stay in this game. If they manage to keep whatever line Chiavetta Bryan is on in check they stand a decent chance of picking up a win. This game, like the last one, should end up an exciting high scoring game.
Mercyhurst: UB will get their power play chances, and they have to be sure to not let them slip through their fingers, they have to be really sure not to give up the short handed goals. The Cyclones have been markedly improved on defense as of late so Latona is going to have to match up well with Kelly.