Who will be "the next Bull in" at Quarterback?

Share All sharing options for: Who will be "the next Bull in" at Quarterback? 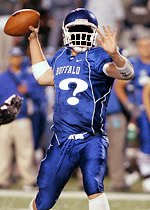 For the first time in a half decade
the field for QB is wide open
Zach Maynard is gone, according to the Bob DiCesare at the Buffalo News Maynard's high school coach said that he (Maynard) was most disappointed with the fact Quinn did not meet with him until 12 days after he started. The Article at the Buffalo news is a good read so I won't get too much into it other than to say if that's the reason Maynard is leaving than this kid really has to learn how life works. Quinn had a staff to assemble, recruits to contact, and he still met with players on the tenth, Maynard was unable to attend the team meeting.
As much as Turner Gill said Maynard would have to earn the job last spring we all knew it was his, Gill burned his red shirt in 08 when Drew Willy went down in Mount Pleasant (thankfully only for a few plays) before Maynard took the helm, Willy was the known starter for three years.
There are currently three Quarterbacks on the UB roster, and one incoming in the person of Rudy Johnson. While Maynard was here the chances were almost 100% that Johnson would red shirt next season, but with only one Quarterback with game time snaps on the roster and a offensive coordinator who is bringing in a system that none of the QB's have experience with Johnson has as much a shot as anyone else.
So who are all three of the candidates?

Jerry Davis - 6-1, 200 Pounds - Fresno, CA
Was a three-year team captain for head coach Tim McDonald at Edison High School in Fresno California. Davis played well enough to be named the CMAC Player of the Year in 2007. During his senior season he threw for 2,100 yards and 29 touchdowns his senior season and was named to the first-team All-Fresno. Despite this he was not highly recruited and Turner Gill's offer was the first, and only that he received.
He used a red shirt in 2008 and played little, but effectively this past season, most notably against Ohio when due to a suspension he got the stating nod. In that game he played an exceptional first quarter (270QB Rating) in throwing 3/5 for 86 yards and one touchdown.
The game experience gives him a head start on the other quarterback's, and he was scouted as a pro style quarterback so the system should fit his tool set well.

Alex Dennison - 6-2, 210lbs - Irwin, PA
Dennison, who red shirted his freshman year was probably right behind Davis on the depth chart. In Dennison's first season as a starting for Norwin, he passed for 1,310 yards, 17 TDs and led the team to a 7-4 record. In his final game of the season, a 35-28 overtime loss to McKeesport in the playoffs, the 6-foot-3 Dennison completed 13 of 30 passes for 249 yards and two touchdowns including a 64-yard strike to Pitt-signee Mike Shanahan. He was Turner Gills
Dennison was Gills annual 'get the QB out of the way' recruit. Gill always went out and looked for a solid, athletic signal caller who could run his offense.

Cory Jorgensen - 6-2. 205lbs - Williamston, MI
Earned a scholarship after walking on in 2007. CFB nation says that the left handed quarterback has a decent arm and is fast, but he'll strictly be the No. 3, emergency quarterback and a key practice player for the scout team.
Being a QB on the scout team may be an advantage, several MAC teams already employ an offense similar to the one that Coach Quinn is trying to implement at UB so chances are that Jorgensen has had to, at some point over the past couple of seasons, line up as a pro set quarterback and faced a MAC starting defense.

Though Graham Watson of ESPN described Johnson as a 'lightly recruited' quarterback she neglected to point out much of that had to do with the fact he Committed to UB way back in late June. This year he lead his team into the state playoff and landing himself on the Maryland Crab Bowl. He was also named ESPN's player of the week for the state of Maryland during the eighth week of the season.