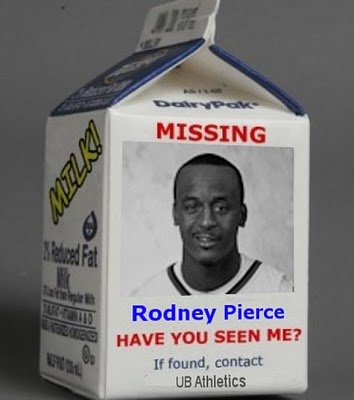 I could have picked any Bull but Pierce is THe on court leader
Too much sorry play to go into it, hopefully whatever the team had hanging over them was beaten out by the Flashes. For awhile in the First UB made a good run at making this a game but after closing to 26-24 late in the first the team fell apart and never really recovered.


In the last 2:52 the Bulls were outscored 8-0, Turned the ball over, missed several shots, managed only one defensive rebound turned the ball over, fouled the other team, ran under a ladder, broke a mirror, and had several balck cats cross their path. They never recovered. UB did not one thing right for the last 18 minutes of this game.
NCAA Basketball

Aside from getting beaten like a cheap rug the failure of Coach Witherspoon to see the writing on the wall with ten minutes left and give 'meaningful' minutes to some guys who don't usually see them was another disappointment. Barnett, Filzen, Watson, and Laleye saw only a total of 29 minutes between them. What was Coach thinking? you're down 20+ points with nine minutes left and no UB starter could hit the broad side of a barn why not just clear the bench.
What's next for UB? Shaking off a night when they played way below themselves and prep for Ohio. In the mean time they have to figure out a way to let Pierce have an off night and still compete, its not fair to put the entire team on him and expect 20-30 points a night.