Share All sharing options for: Hey now the MAC is guaranteed four bowl losses a year!

This is not too big of a surprise but the Bowling Green stand in performance at the Humanitarian bowl was just a preview of things to come on what has to be the most visually offensive field in college football. 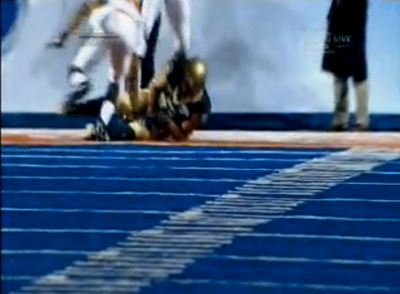 The "Catch" that sunk the MAC this year
courtesy of Falcon Blog
The bowl and the MAC have agreed for the MAC to be the visiting team second tie in for the Bowl. The Humanitarian bowl has had trouble getting the ACC to send fulfill their commitment in recent years.

Commissioner Jon Steinbrecher confirmed to The Star Press this week that the MAC has agreed to terms of a four-year deal that will send a team from the league to the game in Boise, Idaho, on a regular basis. -- Star Press

The MAC was the third choice for the WAC but both the PAC-10 and the MWC could not come to terms with the bowl despite being situated in a geographically favorable position.
If I seem unexcited about this development its only because I am a bit bitter about the bowl performances these past several years. Rooting for Temple and then watching them choke away a game is like having a root canal without an anesthetic.
On the whole this is a great development for the MAC, a fourth secured Bowl Tie in puts us up with the WAC and the MWC in terms of total tie ins and our backup status in the Eagle Bank Bowl will make five MAC bowl teams almost a sure thing every year. During the past two seasons the MAC put up five teams but at least one was a 6-6 at large each year.
The upside to this bowl is the chance for exposure in the rocky mountains and west coast area, something that MAC teams seldom get, the downside is the cost to go to Boise, an estimated one thousand fans of Bowling Green made the trip this year and its hard to imagine this being a financially profitable bowl unless the MAC can draw better than that.