Share All sharing options for: Buffalo vs Akron Pregame 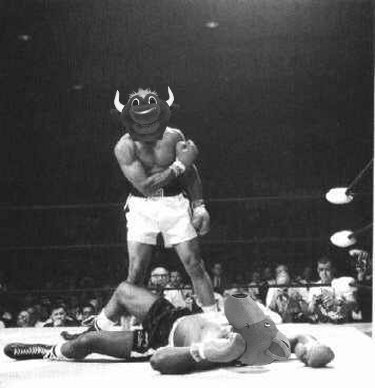 For those of you who didn't know, or if you just forgot, Buffalo plays its biggest game of the year tomorrow, against the best team in the conference. Akron is last years MAC champions and pretty handily beat our Bulls in the championship game. Now its Buffalo's turn for revenge this year.

Buffalo has played pretty well lately (actually pretty much since the Purdue game) losing only one game since December 5th. Over this time, Betts and Pierce have had most of the offensive impact, but its a combination of them and other seniors like Boyer, Smiley, and Boudreau that have taken leadership roles and finally realized that now is the time. Although they struggled their last game against Bowling Green, they have looked better and better every game. 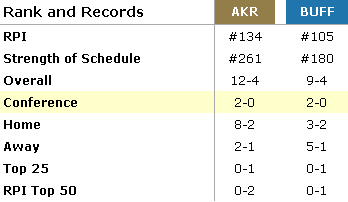 Akron started off the season going 0-2 but have been 12 and 2 since the opening week. They have looked sound in all of their wins, winning by a large margin, and 3 of their 4 losses came against teams from the ACC, the Atlantic 10, and the Big 12. All in all they have looked better than Buffalo throughout the entire year, and were chosen by pretty much everyone as the preseason MAC favorite.

One number that really stands out to me going into the game is the Opponents Points per Game. Buffalo has played pretty good defense, allowing only 69 points against per game (skewed a bit from giving up over 100 to Purdue) but on the other hand Akron only gives up 61 points on average. That is absolutely stellar defense!! They don't even do it with a lot of blocked shots (3 a game) but they do it with hard nosed defense that would remind you of the way a Big 10 team plays D. Akron forces 16 turnovers a game, and us UB fans cant forget how often we seem to turn the ball over. I know Buffalo scores 73 points per game, but it doesn't feel like they're gonna be able to put up that many tomorrow, so they're gonna have to win the Buffalo way with long offensive sets to hold onto the ball, and tough rebounding like they always do.

One key factor to the game...Alumni Arena.

This is the first game back at home since the students came back for the spring semester, and hopefully there's a lot of rowdy Bulls fans who are excited to have college basketball back in their lives. Our crowds seem to always be big for important games, as well as the first game back for the semester, and luckily for Buffalo they happen at the same time. Akron doesn't really have a lot of road experience yet this year (only playing 3 road games) and none of those games have been against a MAC opponent trying to give it back to the Zips for what they did last year. Good luck tomorrow Akron, if you do win, its gonna be one heck of a battle, so I hope you guys are prepared...