It's time to open up conference play, and for a Bulls team that has had some really inconsistent play Miami, at home, smells like an early season trap game. Miami has not been tearing it up themselves but the RedHawks have played one hell of a schedule. 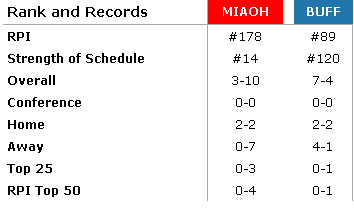 The way Purdue destroyed UB I don't see us having too much better a record than the hawks if we played more than half out games against top 50 opponents.
In this series home field advantage has never really meant to much. Buffalo Swept Miami last season, Miami swept Buffalo the season before that. Since 2003 five of the twelve games have been won by the road team (there was one neutral site game won by Miami).
This game is going to answer, hopefully, questions for both teams. For Miami the question are the RedHawks as bad as their record? Both teams have played Towson, a game lost by Miami and barely won by Buffalo. Buffalo needs to play a complete game, some of their more disappointing losses have been games

If Buffalo can keep the pace of the game up and keep Kenny Hayes in check UB should open up conference play with a win.