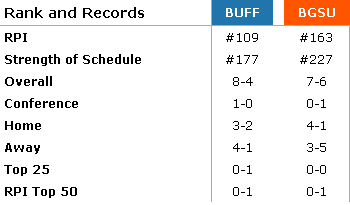 While the Falcons lost a gaggle full of starters the Orr crafted defense showed glimpses of brilliance last week against Akron. The Falcons zone defense cause the Zip's fits during the first half of play and while Akron would eventually triumph any team that can stymie the zips for 20 minutes can challenge a UB team that plays either very hot or very cold.
Bowling Green Starters
For the first 15-20 minutes last week that Falcon's looked like the team that won the MAC last season and in the 2009 MAC basket ball tournament they fared just as well against eventual Conference Champion Akron as Buffalo did (not saying a whole lot).
Bowling Green Player Impact
College Basketball


The first half of Akron/Bowling green reminded me of just how Orr and his falcons shutting down UB last season. UB plays terrible against Zone Defenses and the Falcons run a very tight, efficent zone. This has to be front and center in the mind of Coach Witherspoon and his staff heading into tonight's game.
NCAA Basketball


Offensively Buffalo is pretty clearly the better team, where UB might get into trouble is with turnovers, where they have struggled all year. With the exception of the second half of the Miami game UB has let nearly every opponent stay in the game (or out right overtake the bulls) well into the second half. Miami's huge win over Kent shows the RedHawk's may not be as bad as many believed but its hard to ignore two months of sloppy ball control based on one half of our first conference game.
The other area where UB is outdone by bowling green is in penalties, during non conference play seven Bulls fouled out of games (versus just four Falcons) and UB was averaging nearly three more fouls a game (16.5 for BG versus 19 for Buffalo).
For UB the key is going to be figuring out the Bowling Green zone, and doing so before they fall behind, it's something they failed to do against the falcons last season and while the personnel has changed (more for the falcons than for UB) the coaching styles have not.