Share All sharing options for: UB Fans to KU: Lego my Gill 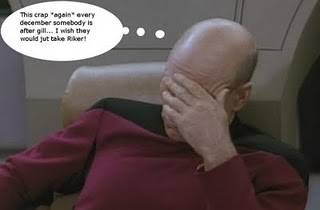 Little Known Fact: Picard is a Bulls Fan
When the rumor was WKU I could laugh to myself, when KU came up at about the same time I really thought Edsall would get all the buzz. But here we are again, another BCS school and another Turner Gill interview. Unlike the Auburn situation I believe KU is serious, and seriously dangerous to UB.
CBS is reporting that Gill will be interviewing, tomorrow, for the job in Kansas and though there are other names floating around (like Edsall) Gill is going first. Gill now has family ties Kansas(for those of you in a coma his daughter is enrolled there) and if his post season press conference is to be believed he would not be interviewing anywhere where he was not serious about going.
Would it stink for Turner Gill to be coaching against Nebraska every year? sure but he has to know in his heart of hearts that Pelini is not going anywhere and jobs in a power conference like the Big-12 don't fall out of trees.
I'm am trying to stay out of the "turner is leaving" mode of thinking but I think its even money that he is in Kansas. That being the case I really hope the Warde Manual has a short list ready to go. And I hope Gill, and his staff, are working the recruits over so that UB does not lose anybody.
If Gill and company can convince James Potts, Devon Hughes, Rudy Johnson, and the other 12 Buffalo commits to stay with the program then Gill leaving is a slight step back. If Gill leaves and this recruiting class falls apart Buffalo could be looking at a big step back.
No matter what happens I don't think there is a chance the Bulls will fall back to the BG (Before Gill) years so as much as this is frustrating.