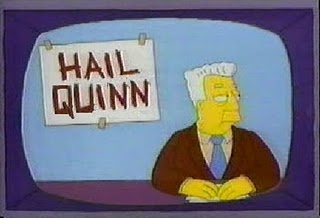 And I for one welcome our new overlords
Last season when Turner Gill was in the middle of the Auburn fiasco and UB was getting attention as a the Cinderella story of the decade in college football Warde Manuel flew mostly under the radar. I do remember seeing a few interviews with Manuel, one in particular sticks in my mind. He discussed how he could not find anybody to take the job, how Buffalo was perceived to be nothing but a shot in the dark opportunity for division II coaches.
Turner Gill had started to fall off the radar in Green Bay, and to Manuel's credit he found Turner Gill and convinced him to take a chance on Buffalo. The program has come so far that this time around it took Manuel less than a week to pull in the offensive coordinator for the #4 team in the nation. The appointment of Quinn as a head coach is a chance to keep the momentum going for UB, virtually uninterrupted.
Right off the bat, as soon as Quinn's name was mentioned last week, the Debbie downers started coming out in force today the few, the proud, the nitpickers got a little louder.

The Scary Questions:
He's going to start when?
He did not call plays!
Why is he still a coordinator?
Quinn will not start as the UB Coach until after the Bowl. This was the first complaint I saw coming out of some of the more hard to please UB fans. For me this shows class by everyone involved and its a net positive for UB.
Quinn could have bolted after being passed up, again, for Butch Jones but he is doing whats right by his players and sticking on through the Bowl game. What Kelly did this year is a classless move (no matter how often it may happen). You don't recruit kids, mentor them, help them to grow, and then jump ship before the biggest game of their college careers.
Secondly UB is going to get a lot of publicity during the Sugar Bowl, how much more would they get if Quinn brings on Loeffler or Bedford should Reed or Barrett decide to move on. A BCS game, against a team From Florida and we want to make an impression on our Florida recruits? Is there a better way?
As a UB fan the only thing I want out of Quinn is to quickly move on his staff, he needs to announce he is keeping Barrett and Reed (if they wish to stay) or name his assistants at Buffalo no later than the Tuesday press conference. There is not much you can do about recruiting until the blackout dates pass but Gill had a list and, presumably, it would be a better list for Buffalo's needs than Quinn can invent while simultaneously preparing for his Bowl game.
Unlike the effective starting date the 'not a play caller' meme worries me, a bit. Kelly called the plays but it was for an offense developed by Quinn. Quinn knows the X's and O's well enough to put all the pieces in place for an offensive juggernaut. He has experience as a head coach, if only when Brian Keely decides to move on before a bowl games.
Ill be watching the Sugar Bowl pretty intently to see how well he can read the other team and I hope that he shows himself well (beyond the fact I can't stand Florida).
Finally there are the calls that he has been passed up by CMU and Cincinnati. I can understand a guy who is comfortable working for someone else and maybe he just was not ready to step out until now. FireUpChips had a great article today (about his own beloved team who is searching for a coach) about how CMU was looking for a fresh start after Brian Kelly.
He also spent the first five years of his career coaching both football and wrestling, arguably more a wrestling coach than a football coach. It was not before he landed on Brian Kelly's staff at Grand Vally State that he became exclusively a football coach (1989). He and Kelly were at GVSU until they got the chance to jump to CMU.
In reality Brian Kelly has been coaching at the 1A level for five years. Looking at the list of potential coaches UB was rumored to be interested in there were many with more time at IA who never sat in the drivers seat.
For the most part UB fans, and sports media, are completely thrilled at the hiring. There are a ton of positives to focus on beyond the success of the Bearcats this season.
The Positives:
Coaching Wrestling a plus?
How Strong of a mind is he?
What kind of a recruiter is he?
This might seem odd but I think the biggest plus for Quinn is the fact he managed some level of professional success as both a football and a wrestling coach. It shows that he is not only smart enough to be a student of two sports but that he is enough of a natural leader to handle something as big as a football team or as small as a wrestling team.
Turner Gills greatest strength as a coach was his ability to connect with his team, each as an individual, and to bring out the best in them. I don't know if Quinn will have this same ability but the fact he is not tied to a certain sport or team dynamic to have success speaks well of him.
Other than Maybe Brian Harsin I don't think there was a football mind, on the market, that could match Quinn. There is no question about how well he takes care of the X's and O's and if former Bills assistant coach and U.B. alum Jim McNally is right Quinn is a solid and enthusiastic leader. McNally has coached at clinics with Quinn. He calls Quinn "the best assistant coach in college football."

"He's a fired-up, go-get-'em, no BS kind of guy, he's enthusiastic, and when he talks to you it fires you up. A lot enthusiasm, and he's a very knowledgeable guy." -- Jim McNally

Combine this passion with the powerful offenses he developed at Central Michigan and Cincinnati and in terms of football quality UB has gotten one of the better minds in the game.
As a recruiter he has put together some very strong teams. It's hard to know how much of that is him and how much of that was Kelly but he will have something of a challenge holding onto the stellar class Gill had been assembling and filling out the final five scholarships from this season.
Is Quinn the guy to continue the building of the Bulls football team? only time will tell on this? but of all the names on the initial list there is little doubt Quinn has the biggest upside. All that's left to see is how the assistant positions fall. A big indicator of how much this upside translates is in how well Quinn can hold onto the recruiting gains of 2009.