Quinn: "Next Bull In"

Share All sharing options for: Quinn: "Next Bull In" 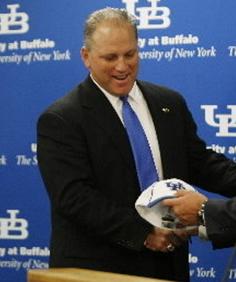 Just got done listening to the Quinn press conference, he is defiantly a different personality than Turner Gill (almost night and day in terms of volume and intensity) but under his intensity he holds a similar philosophy for life and for football to the prior UB coach. First and foremost he talks about developing young men, not football players.
"We want them to graduate with a degree and compete for championships" was one of the first phrases out of Quinn's mouth. He later went on to say that the goal of being academically successful and successful as a man "Has to be at the for front of the Athletes mind or there is no place for them in this program."
Warde Manuel went out of his way to praise the academic accomplishments of Quinn's athletes. Manuel said he was impressed with "Things about what he has done academically OL at CU has the highest GPA" and that his priority is always to get "Coaches who speak about preparing kids for the rest of their lives."
Quinn's catch phrase for the conference was "The Next Bull In". He said all his players would encounter adversity, just as all people do, and he wanted the team to be one full of young men who stand up for each other during those times.
When confronted with the only real meme I have seen out there about him "Always a coordinator" he tackled it head on:

No real Surprises on the type of Football Quinn will bring to UB. Defensively he said he would bring push an "Attacking Aggressive Style, relentless pursuit and when they arrive they will arrive in a bad mood". Offensively he will push the spread that worked so well at Cincinnati emphasizing his belief in keeping the Tempo up to confuse defenses.
While he has promised to put 100% of his attention on Cincinnati's date with Florida in a couple of weeks he has said that he expect to have his full coaching staff named by mid January noting that he already had more people in mind than he had positions for.
He talked a lot about wanting to get to know UB better, about loving the Great Lakes (his Five F Philosophy is Faith, Family, Football, Fishing, and Fun) and about how he things that He and Buffalo may be a solid match. These are all the kind of things that you expect out of a meet and greet presser but for his part Quinn came across as very genuine.
The main press conference ended with Ward Manuel emphasizing just how far the program has come and how that made his job 'easier' and how he feels the process selected the right man to keep UB moving forward

"We looked at mainly OC/DC. Candidate pool was night and day this time. Six people all coordinators 5 of them with championships" And that he had "Turned more away than he had in his total pool in 2005." -- Warde Manuel
"In Jeff we found someone that I believe will have us back in Detroit hoisting the championship trophy above his head, in bowl game, all the things we have become accustomed to." -- Warde Manuel

Thanks to Buffalo Sports Daily for the Image