Share All sharing options for: Potential Coach: Get to know Jeff Quinn

Given that I can imagine how Cincinnati fans must feel I don't want to seem like a vulture at the thought of picking up Jeff Quinn from the massive upheaval that Notre Dames most recent failure, but at the same time When I saw his name start pop up as something more than a "wouldn't it be nice" (thanks to Rodney McKissic) he instantly jumps to one of the top two candidates on my list.
Quinn helped mold the BearCats offense into a force of nature and is a significant part of the reason the undefeated BearCats have a real chance to finish third in the nation. This is the type of candidate that would have been unthinkable several years ago. To be honest I am still trying remain a bit guarded. Their is a old hunters saying, 'if you chase two rabbits you'll catch neither', if Quinn is not realistic and we go after him we may lose someone else.
Quinn is up for his old bosses job at Cincinnati, up for the OC job at Notre Dame, and I am sure some other schools might look his way. On top of all of that he has a BCS bowl to think about. Still it seems that Ward Manul has moved quickly on Quinn:

Jeff Quinn, who will led Cincinnati in next month's Sugar Bowl, interviewed with UB on Monday, according to a source. Quinn is also a candidate for the head coaching job at Cincinnati, who is looking to replace Brian Kelly who left for Notre Dame. Interim coach Danny Barrett remains on Warde Manuel's radar. -- Rodney McKissic, Buffalo News

Quinn attended Elmhurst College where he was successful both on the Football Field and as a wrestler (He was inducted into Elmhurst's Athletic Hall of Fame in 1993). Quinn earned all-conference twice and was a third-team All-American in 1993. He also won two College Conference of Illinois and Wisconsin wrestling titles. 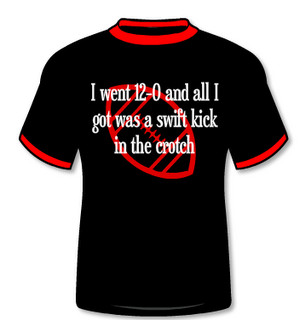 New T-Shirt for Cincinnati
courtesy of ND football
(also available in Boise State and TCU colors)
Unlike most football coaches at his level Quinn spent a good deal of time coaching both Football and Wrestling (1984-1988). In 1984 and 1986 he was an assistant football and wrestling coach at DePauw University. Then from 1986 to 1988 he went to Ohio Northern to become the head wrestling coach and an assistant football coach.
Then from 1989 to 2003 he went to Grand Valley State to be an assistant coach. Being part of a staff that won two back to back national championships got him a job with Central Michigan via Brian Kelly (who also moved up from GVS to CMU). When Kelly moved up to Cincinnati Quinn remained to coach the Motor City Bowl, after that he moved to the BearCats which brings us to a perfect season, a stolen head coach, and a chance for Buffalo to land a seasoned coach.
The Positives of Quinn:
The Negatives of Quinn:
Would this be a good hire for UB?
Yes, he is up there with Danny Barrett as to a coach who I think could hit the ground running at UB. He knows the conference well, he has recruited well, and he is a national name which can help to preserve UB's recent inroads to states like Florida and the Carolina's.