Let it never be said that the folks over at let's go Rockets are subtle when it comes to victory dances. I was planning to just make up some funny awards and maybe make a graphic or two but with the first ever MAC Blogger Pick'em title secured LBN and JPH did some warm up stretching and commenced to do a victory lap, pulled a sharpie out, called their agents, and ordered themselves a trophy. While they are going to hold it this year they have been kind enough offer it up to next years champion.
So here are the two awards for the inaugural MAC Blogger Pick'em Contest:
MAC Blogger Champion 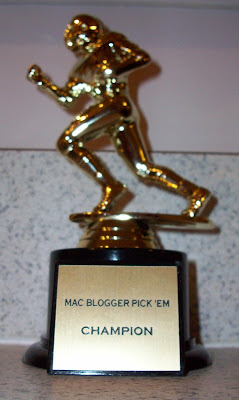 Let's Go Rocket's (80-25)
The MAC Blogger Pick'em Champion goes to the MAC Blogger who most often picks correctly and has picked in at least 60% of the games.
With more than one hundred games picked I would have thought there would be some more separation but there was only one win between the Champion (LGR 80-25) and fifth place (Van Delay 79-26). But a win is a win so congratulations to L8N and JPH for schooling the rest of the participating Bloggers.
MAC Daddy Award

Van Delay (42-12)
The MAC Daddy award goes to the Blog that most often picks correctly in conference games and has picked in at least 60% of all conference Games.
I was hoping to get Nick to wear the pimp costume but I will have to settle for a stand in. Nick Lost the overall title by one game but edged out LGR in conference games by the same margin. Falcon Blog and I were also in the running, both ending up two games out.