Drew Willy back on the Practice Squad

Share All sharing options for: Drew Willy back on the Practice Squad

I was really looking forward to Willy possibly getting some playing time against Buffalo this coming week. But after making it to the 53 man roster this season Drew was bounced back to the practice squad yesterday. Being part of the Colts organization is still a huge plus for the best Quarterback in Bulls history and being on the Indy practice squad was somewhat exciting last week.
Drew is taking this all in stride and gave some insights into how he has handled his first year bouncing around the NFL in an interview with the Buffalo News. Drew reflected on everything from his High School experiences to how Turner Gill and Danny Barrett helped to keep him focused and working towards getting onto an NFL team during the long stretch between his August release by Baltimore and his recent signing with the Colts. 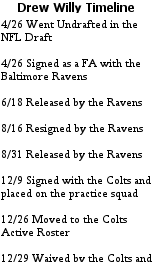 From the time he was cut by Baltimore until he was picked up by Indianapolis was a span of four months. Even then, he remained positive and had frequent phone calls with former UB coach Turner Gill and assistant Danny Barrett. -- Buffalo News
Over the past several months Drew has been working out in New Jersey trying to keep his edge while his agent has been working in the background to find him a plance on an NFL roster
"I was talking to my agent every week and he did a good job of getting me back into the league and I thank him for that, I would watch all the games and try and keep myself sharp. I was working as hard as I ever had and enjoying my family. I knew something good would happen because I could see that I could play in this league." -- Drew Willy
As a UB fan I am thrilled that if Drew has to be on the practice squad anywhere, it's with the Colts. Beyond the fact that its an organization which already has some UB talent on its roster the sheer effectiveness of the Colts along with the staff that has supported Peyton Manning makes it a great place for a young quarterback to develop.
"People say it's one of the top five organizations in the league but from my point of view it's the best, There's so much great leadership here and the guys work hard and they're accountable for what they do. Everything runs smoothly and everyone has one goal in the building and that's something you want to be a part of as a player." -- Drew Willy