Well That was fast

Share All sharing options for: Well That was fast 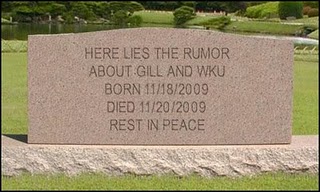 The first 'Gill is going to' Rumor died after a scant 36 hours on the web. In addition to Rodney McKissic of the buffalo news shooting it down the source itself has now declared that due to 'Financial Concerns' the 'Very Limited' conversations that were being held are now over.
Given the tone of the post on the WKU sports blog I can reenact exactly how this played out.
There are going to be other scares, and perhaps one or two that are really worrisome (Kansas) but it's nice to get the first one out of the way.