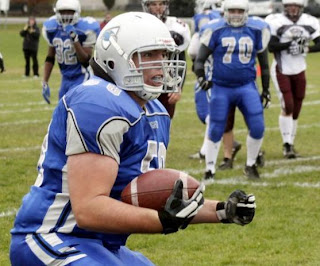 The whole and original Article is here (eastottawa.ca) And is by Dan Plouffe
The St. Peter Knights wrapped up a dominant football regular season with a perfect 6-0 record by downing the host South Carleton Storm 31-0 on Friday, Oct. 23 – the Knights’ fourth shutout of the year.

"I’m happy, but that’s not our goal," St. Peter coach Jim Mick said, noting the regular season serves as a time to learn before they’re really measured. "An undefeated regular season would mean nothing to us if we fell in the playoffs."

On first-and-goal from the one-yard line, offensive tackle Jeff Veinotte caught a pass in the end zone to record the first touchdown of his career.

"They told me I’ve got one play to try and get a touchdown or a catch at least," smiled Veinotte, who displayed a shocked look on his face when he scored even though the play was designed for him as he lined up at tight end. "It was pretty surreal. Even if I got a penalty, I felt I had to cheer anyways because an O-lineman doesn’t get a touchdown very often."

The chance for the University of Buffalo-bound Grade 12 student to score a major himself was a reward from the coaching staff for helping on countless occasions to plow the way to the end zone for other Knights.

"I said, ‘You’ll get this and have some fun with it, and then get it out of your mind and your system,’" Mick laughed. "I mean, good for him – he deserves it and he’s a class act – but certainly at the next level, he’ll never get that opportunity."

Veinotte has been savouring his last chance to enjoy high school football alongside teammates he’s grown up with from both the Cumberland Panthers and Knights.

"I know that once I’m gone I won’t be seeing the guys very often because they’ll be off wherever they go and I’ll be in Buffalo," the 6’ 5", 300-pound 17-year-old noted. "Just being able to spend time with my friends and enjoying my last season with St. Pete’s is awesome."