Share All sharing options for: Killing those coaching rumor weeds

And so it begins. My guess would be that we will see fewer 'Turner Gill is going to $SCHOOL' rumors pop up this year (5-7 or 4-8 will do that) but the first lead balloon has been floated. This one started when "The Bowling green daily news wku sports blog" posted this:

A source close to current Buffalo head coach Turner Gill told the Daily News this morning that Gill has interest in the open position for head football coach at Western Kentucky. -- BGDNWSB

It got picked up on a few bulletin boards. Logically there is no way that WKU is a sensible move for Gill because:
Still the rumor weed nailed the James Starks injury several days before the Buffalo News had the whole scoop so I was still a little worried, until today. It seems that if Gill was interested he is no longer interested.

The same source that told the Daily News on Wednesday that current Buffalo coach Turner Gill was interested in the Western Kentucky football job said today that Gill and company haven’t heard back on anything from the Western Kentucky athletic department regarding an inquiry put in by Gill’s camp about the job.

The source said that if representatives for Gill haven’t heard back from WKU by this afternoon – they would likely remove Gill’s name from consideration. -- BGDNWSB

I honestly doubt that Gill would contact them one week and ignore their calls the next. I also think it would be seriously unprofessional of WKU or Gill to pursue any form of negotiations, no matter how informal, without an OK From Manual (Gill is on a four year rolling contract). Perhaps somebody wanted to make the WKU job look more high profile than it is by picking a name that would catch attention and floating it out there. 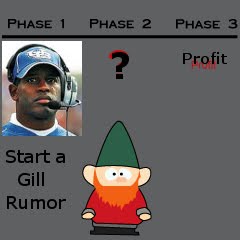 Unless WKU is run by snidely whiplash I don't think they would be going after Gill without permission and I doubt Gill would slap Manual by going behind his back, that's just not something to expect from a man like Gill.