Us against Them: Bowling Green at Buffalo

Share All sharing options for: Us against Them: Bowling Green at Buffalo 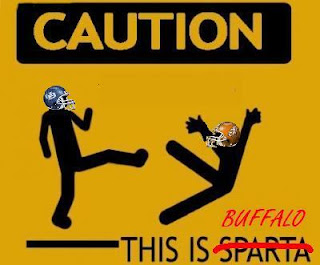 While UB is not completely out of the divisional hunt one has to face the fact we are staring down some pretty lean odds. Four years ago many fans would have sworn off this season and focused on the ever approaching basketball season but today UB is not the football program it was four years ago and I hope we are not the fans we were four years ago.
UB under Turner Gill has never been a team to lay down quietly in 2006 a team that had never known success, and was just 1-7 on the season, took down a Kent team that was eying a Bowl invite (5-3,4-2). In 2007 after being eliminated against Bowling Green came back and won their last game against Kent to win a share of the division. Finally last season, after falling 2-4, UB thundered back with a 5-1 finish.
In short if any of our opponents think that Gill won't be able to motivate his troops because the odds are against us or 'there is nothing to play for', well I feel sorry for them. UB still has a decent shot of making 6-6 or 7-5, maybe not a bowl worthy record, but a respectable one given the adversity thrown at this team.
I doubt too much that the Falcons will be either looking past us, or sitting in their tent like Achilles. For one thing they are as 'in the race' as Buffalo. The Falcons are probably also as put out as UB is about the state of their season, both teams were supposed to be fighting for the east, instead we are keeping Miami company in the cellar. Finally there is the little matter of revenge:

Buffalo is just 2-4 all time against the Falcons but have only been outscored by an average of ten points given how bad UB was from 2000 - 2006 that's saying something. Gill has a 1-2 record (1-1 in overtime).
Coaching (Buffalo, Comfortable):
I like Dave Clawson and he may, eventually, do big things in the MAC but he is still an unproven coach who took a team that had been 14-11 over the past two seasons, been to a bowl, and won a share of the east. While he was already on the hot seat Gregg Brandon taking out his frustrations on the Bowling Green students is effectively what handed the job to Clawson.
Turner Gill is having as hard a season as any coach in the MAC, in many ways he and Clawson have faced similar obstacles this season (injuries, bad bounces, high expectations) but even if the rest of this season falls flat Gill has proven he can be a winner.
Offense (Buffalo, Barely):
Buffalo is the second ranked offense in the MAC, and easily the most balanced offense. Despite their record they are the only team in the conference to be among the top five in both passing and rushing. Gill has built up a pretty strong arsenal of receivers (Roosevelt, Hamlin, Rack) and Ike Nduka has reintroduced a running game to UB. In games Ike has started, and finished, he has put up 172, 131, and 172 yards. It too early to make James Starks give up his torch but clearly UB, with Nduka, have rediscovered the running game.
The frustrating thing about the UB offense is that as well as they move the ball they just kill themselves with turnovers and red zone performance (18 turnovers and just 4.6 points per trip inside the 20). UB has shown some improvement in both areas but as soon as you think they are turning a corner Maynard throws a bad pass in the red zone.
While UB is the best balanced offense in the conference Bowling Green is clearly the worst. Ranked first in passing offense and dead last in rushing offense there is no doubt about how the Falcons will likely attack UB this year but knowing what they are going to do and stopping what they are going to do are two different things.
If being so dependent on the passing game, playing outdoors on a cold November night in Amherst, was not bad enough the lack of balance within their passing game boggles the mind. Freddie Barnes (aka the man of steel) has one third of all their catches, one third of all passing yards and 60 percent of all touchdown receptions.
While he may express a desire to have a more balanced attack:

"We want to be more balanced and run the ball better. It's something that we're aware of and we don't want to be so heavy in the passing game." - Dave Clawson on a MAC teleconference

So far his 'Clawfence' is a one winged bird, albeit it with one hell of a working wing in Barnes. Aside from the passing offense Bowling Green is markedly better than Buffalo it is in keeping the ball (the Falcons have just half the turnovers UB has).
Defense (Push)
Neither team has a defense that can be counted on. While UB may be statistically better in many areas both teams have given up second half leads on more than one occasion. Both teams struggle to take the ball away (Because of offense turnovers this is less of a problem for the Falcons than it is the Bulls), both struggle to get to the quarterback (less than 1.5 sacks a game), and both have four or fewer tackles for loss in a given game.
How do you rank one of these defenses ahead of the other? You could focus on the fact that Bowling green has a somewhat respectable passing defense but that is completely negated by an awful rushing defense. You could point out that Buffalo is the more balanced defense but that just means they are getting pounded through the air and on the ground.
Special Teams (Bowling Green, Slight)
Whether viewed statistically or subjectively Bowling Green has marginally better special teams than UB. Both are well below that of their opponents but Bowling green has done a better job in most phases of the game.
Neither team is going to be counting on their special teams to win them a game, both will just be hoping bad return coverage, a bad field goal attempt, a missed extra point, or a turnover don't hand the game over to the other team.