I saw him throw the football around this spring at the white house and I knew even in March that his vision, his passion for football, and his eloquence as a leader put him far and above any coach or player in the Conference, perhaps in all of college football. -- Jon Steinbrecher

Despite objections from a resurgent Ohio football program, a promising Temple team and division powerhouse Central Michigan all MAC Games from this point on are completely symbolic. Barack Obama will win the MAC East by going 8-0 in conference, he will then defeat CMU in the MAC championship game when he kicks an 83 yard field goal with 1 second remaining.

It sucks, my guys have worked hard, we have a four year starter who has brought some recognition to this conference and now we are told we can only play for pride? This is a pretty transparent move by commissioner Steinbrecher to put the MAC on the inside track for a BCS slot at the expense of the kids on my team-- CMU Coach Butch Jones 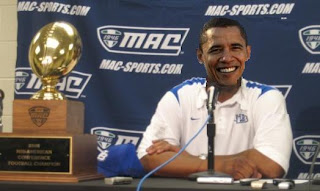 Of course we wanted to get him in the conference before a bigger name snatched him up, and yes its going to be hard to deny the MAC BCS standing now, but the President was brought in solely to improve the level of competition within the MAC and for the betterment of all member institutions.

For his part Obama was humble in accepting the award and would not rule out a run at the MAC Soccer Championship this fall.