This weekend UB will goes on the road to face the Washington and Jefferson Presidents. The Presidents are so far win less this season. Before UB heads down I79 to take on W&J the presidents have a date with Duquesne who bumped them out of their conference semi finals last season. While their record might seem unimpressive their competition has been strong.
Their schedule has been so strong that the AHCA computer poll has them ranked 35th, ahead of some teams who have already stacked up five wins (Buffalo at 6-2 is ranked 29th) 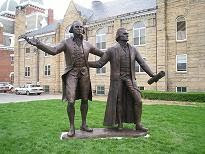 Presidential Group Hug!
On to the Questions:
1) Who does UB have to watch out for?

Forward Mario Panucci is their all time leader in points (AHCA era), in the last three games he has had a hand in nearly every one of the eight Presidents goals (2 Goals and 4 Assist). Their leading Goal scorer this season is Jim Pasquine.

2) How good is their Goalie?
It's hard to know because thus far the Presidents have played a pretty hard schedule. Mioduszewski is giving up just shy of four goals a game this season which is pretty much in line with last season when he gave up just over four goals a game.
3) How are they on the Power play?
They are pulling just over 10% during their last ten games. The only goals they hove gotten with the advantage were scored in what must have been a blood bath against John Carrol where they managed two goals in *10* attempts
4) How are they Short Handed?
They given up six goals in 29 attempts over the last three games. Giving them about a ten percent deficit in power play versus short handed play.
5) What to expect form the game?
W & J is playing some very undisciplined hockey this season. They have five players with double digit PIMS through just six games, that lack of discipline has cost them where their skill could save them. As good as Mario Panucci he has spent more than a half hour in the Penalty box. Compare the to UB who has just one player in double digits (Jimmy Draben) and nobody else is even over four.
If the Presidents decide to keep playing AHCA/WWE Raw they will have way too many short handed situations for their team to have a good shot at winning either of this weekends games. If their recent behavior is an anomaly and they keep Mario Panucci and Jim Pasquine on the ice (and in 5 on 5 situations) W & J has the talent to sneak up and take one, or both, games away from the Bulls.