Things to note: CMU does not have a mascot. If someone, anyone, would have told me this I could have saved myself some time. Here I was half way through an interview with CMU Mascot Scottie: Scottie the CMU mascot, no not that CMU
When, for the first time, I referred to CMU as Central Michigan things went bad. I've never seen a grown man in an animal costume 'look' so dejected. He went on about how I made him believe that finally, someone, somewhere cared about Carnegie Mellon Tartan Football and that loosing that belief was worse than if he had never had it at all.
I was a little peeved myself, I had wasted an hour tracking this guy down and had mentioned several Central Michigan Players, when I asked Scotty why he had not spoken up earlier he lost it.

"I just told you, nobody follows Tartan football, not even me... I really thought this LeFevour guy was our quarterback" -- Scottie

It was at this point I had to end the interview, everything after this was a sting of colorful language about my questionable parentage. So my search for the CMU Mascot/Fan interview led me to a foul mouthed, presumably alcoholic, lower division football mascot with an inferiority complex... Thanks a lot Google, in the parting words of Scotty "%$^& you and the horse you rode in on"!
So here I was, with nobody to interview, late in the week and I have nothing save a video made by FireUpChips. Rather than bother with the interweb I decided to slack on the interview this week and go rent something to watch. There I was walking down the TV aisle when I found them, the perfect interviewees for this weeks game!
Ladies and Gentlemen, I give you my nominee for the new CMU Celebrity Fans... The CHiP's. So guys how long have you been rooting for Central Michigan and why on earth would you give up California State jobs, and the climate, to move to Mount Pleasant?

Sargent Getraer: I first heard about Central Michigan's football team back in 2005 when the NCAA was going after teams with Native American Nicknames. The Chippewas were all over the ESPN along with other schools but the broadcasters kept calling them "the Chips". They had me right there.
Officer Poncherello: So that's when I wrote Central Michigan University telling them if they made us their mascot they could keep their logo's, uniform's, and had a built in fan base in Santa Barbara. I received a really nice reply from a Steve Smith at CMU which thanked us for our offer but he informed us that the Saginaw Indian Tribe was going to convince the NCAA to continue allowing the university to use the name.
Officer Baker: As to why we moved to Michigan I have three words, California Real Estate. Sure Mount Pleasant might be quiet, and a bit cold but houses are affordable. When things got so bad I had to consider buying Ponch's old mobile home I knew it was time to go.
As for the state jobs, Lately California has been looking rather bleak on the job front, sooner or later they are going to downsize the Highway Patrol.
So since 2005? That was a great time to start following Chip's football,they have pretty much owned the Mid American Conference for the past four years. What are some your favorite moments from this recent dynasty?

Ponch loading up for the 2007 MCB
Officer Poncherello: Well without a doubt it was winning the Motor City Bowl in 2006, I'm just glad we won it before they renamed it the Pizza, Pizza bowl. I knew early on in 2006 that CMU had something special in Dan LeFevour. He reminded me of a young Ponch, destined for greatness. I tried to give him my 83 Thunder bird but the university kind of frowns on that.
So what have been some of the low points in you're tenure as a CMU fan?

Parking Lot (or Lack of) Duty is the low point
Officer Poncherello: Well when we first got here we needed to find jobs, so we applied to campus security. Thankfully they needed a couple of people like us, you know guys who could really connect with the youth of 1980... I mean 2006. That first home tailgate was about the hardest dollar I had ever earned. Not since I had to deal with arresting Jerry Billings twice for DWI and stop a guy from torching his car in the same day did I have so much stress to relieve at quitting time.
Officer Baker: I don't know I kind of enjoyed tailgate detail. Sure the kids were loud, abusive and drunk, but unlike Ponch I am a single guy. I can end the day smelling like beer (but not miller chill). for me the low point is tailgating *this year* I think the only tailgaters left are from the glee club..
So are you guys going to make it to Buffalo for this weeks game?

It's all about the grub, I'm on my way
Sargent Getraer: Hell yes we are going. I don't expect too much in the way of a competitive game between Buffalo and CMU but at least I can get something decent to eat! I love the people and atmosphere of Mount Pleasant but in terms of food it has all the flavor of a Big Mac wrapped in a Taco Bell.
Well before you guys skip the game to enjoy Mighty Taco maybe you should consider the fact you lost to EMU last season! 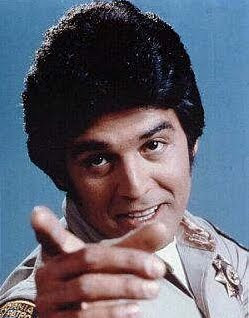 Watch it Bull
Officer Poncherello: If you mention that game one more time on this site I'm going to show you that Ponch has some Punch... Jurisdiction or not I'll stomp you...
We lost a meaningless game to EMU, and sure Andy Schmidt made our secondary look like the the League of Women's Voter, Mississippi Chapter, but so far nobody has been airing it out on us this year and we aim to keep it that way.
Well, it seems I have worn out any goodwill these CHiP's have for me, let's just leave it at "let's hope for a good game in which nobody gets hurt"

We have to go, someone is enjoying themselves
Officer Poncherello: Just watch the EMU references, Ill be watching... It would be a shame to smudge up my bike running you down.
Officer Baker: You'll have to excuse my partner. Ponch blew all the money he had saved up, without asking the wife, going to the Arizona game. Since then CMU winning games is the only thing keeping him from going Stacey Koon on opposing fans.