Share All sharing options for: Know your foe: Week 2 Pittsburgh

The School:
Founded on what was the American Frontier in 1787 Pitt is one of the oldest chartered institutions of higher education in the United States. The School was renamed the Western University of Pennsylvania in 1819 and finally Pittsburgh University when they relocated to their current campus in 1908. Like UB Pitt was a private institution until the 60’s when they were made a state institution. One of the greatest academic achievements of Pittsburgh University was the creation of the Polio Vaccine, an apt achievement because watching them squeak by UB last year on questionable officiating made me sick. 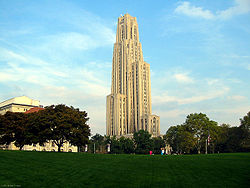 Cathedral of Learning
Pitt’s campus features the Cathedral of Learning, a unique building among American universities. Its the tallest educational building in the Western hemisphere, built in the 20’s on Frick Acres (no, I am not making that up). Besides hosting classrooms, common areas, and rooms of common education purpose two floors of the building house classrooms build in specific cultural styles called ‘nationality rooms’ most of which are used today as functional classrooms

While UB got allot of attention for the noble character of our 58 football team the Panthers took a similar stand in 1956 when they were invited to the sugar bowl and refused to play without fullback Bobby Grier. Unlike the 58’ tangerine bowl Pitts demand that their entire team play was heard, and accepted. 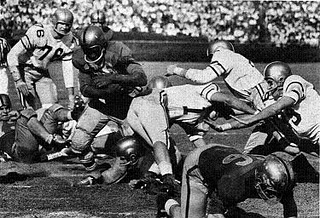 Pitt Fullback Bobby Grier
The Panthers have nine football championships, Two national basketball championships (before the NCAA tournament), and multiple individual champions in Wrestling and Track.
Series History and Last Meeting:
Like week one foe UTEP the Bulls met Pittsburgh for the first time last year. In that game 60 yards in penalties including two very questionable personal fouls kept UB from pulling away from Pitt, in the fourth the depth of a Big East team became too much for UB to overcome and the Bulls lost 27-16.

UB’s defense played well all night but Pitts ability to keep Starks and Roosevelt from making big plays and untimely mistakes were enough to keep UB from wining its first game against a BCS level opponent in six years (Rutgers 2002).

Whats Changed for them:

As if losing LeSean McCoy was not enough they lost his backup (LaRod Stephens-Howling) and their starting Fullback (Conredge Collins). For an offense whos only positive quality is its running game losing your entire backfield is going to make for a painful season. New coordinator Frank Cignetti (formerly of California) has a history for building up Quarterbacks so in the long run the panthers will probably run a more two dimensional offense, how much of that is going to show up this season is anybody's guess.

Losing Scott McKillop on defense is a big hit, but Pitt is returning the bulk of their very imposing front seven. This is one of the best defenses in the league and it will be the biggest test for UB during the regular season. If the line is going to be softer anywhere it will be up the middle where nose guard Rashaad Duncan leaves a vacancy. ng to show up this season is anybody's guess.

Why to be optimistic:

UB should come into this game with a stronger front seven than they have ever had. Though some experience is lacking in terms of size and speed this year’s unit could give fits to a Panthers offense that struggled last year when they were in a far better place at running back.

On the other side of the Ball Naaman Roosevelt has the potential for a big day against a Pitt defensive secondary which only survives because of the seven guys up front. Pittsburgh lost free safety Eric Thatcher and is vulnerable to the vertical attack should Maynard be able to find the time and space to get him the ball.

Why to be pessimistic:

Breaking in a new line, in week two, against Pittsburgh would be bad enough but breaking in a new quarterback behind that line is a recipe for disaster. The running game will be able to relieve some of the pressure, they were respectable last year against the Panthers, but Maynard will be called on to make big third down passes against a defense that has a great outside pass rush.

There are few reasons to worry about our defense in this game, they are an improved unit from last year and Pittsburgh has no substantial improvements over their 2008 squad. Perhaps the only reason to worry most is Frank Cignetti who is gong to bring a different philosophy to the team and has had stunning success with quarterbacks in the past.

While this game may be winnable it's not a game UB should count on having when Bowl selection time comes. If the new front seven UB has on defense are everything we expect them to be they may keep us in the game, But Asking Maynard and the offense to exceed what the Bulls did last year may prove too tall task.